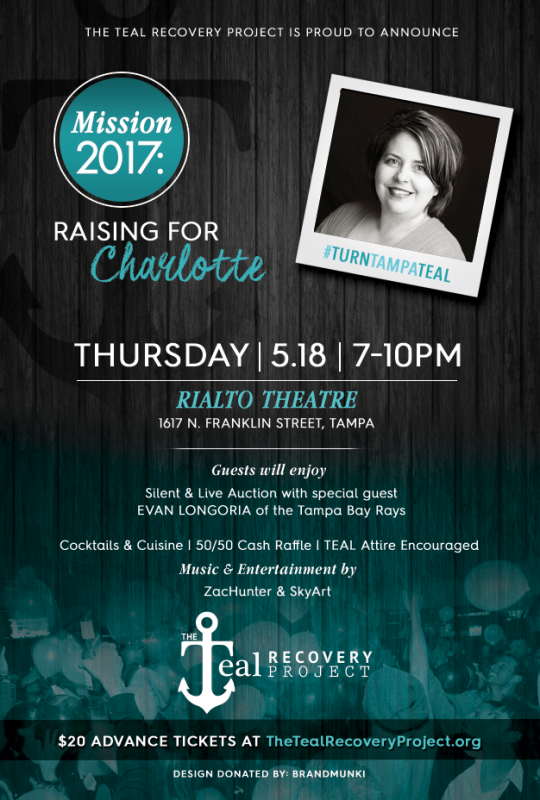 The Teal Recovery Project will host our 5th annual fundraising event ‘Mission 2017: Raising for Charlotte’ in Tampa, FL on Thursday May 18th, 2017 at 7pm. Proceeds from this years’ event will benefit our 2017 recipient, Charlotte Lawrence, a single mother of four children living in Orem, Utah.

There is something for everyone – a unique silent auction and exciting live auction hosted by Rena Carideo (Mission 2013 recipient), TB Rays resident DJ, Doug Hensel and special guest Evan Longoria, 3rd baseman for the Tampa Bay Rays! In addition to opportunities to win amazing raffle items and our TRP treasure chest packed full of goodies valued over $1,000.

This years’ fundraiser will be an another exciting event from The TRP that you don’t want to miss! The festivities will also include music & entertainment from ZacHunter & SkyArt. Plus, delicious complimentary cuisine from our amazing local restaurant partners.

In June of 2012, Charlotte received the news no woman or person ever wants to hear, “you have cancer.” While this diagnosis is scary enough, her doctor’s lack of sensitivity and compassion left her feeling even more devastated in that moment. The initial diagnosis was that Char had both ovarian cancer AND cervical cancer. She immediately went to the Huntsman Cancer Institute in Salt Lake City and soon learned that she had been misdiagnosed; there was no cancer present in the ovaries. However, her treatment team still pushed for a full hysterectomy. This simply didn’t feel right to Charlotte and she quickly began researching treatment options for Stage 1B1 cervical cancer. Through a lot of study, she found another option…

On July 25, 2012 Charlotte underwent a surgery called a Radical Trachelectomy. Given her financial status and being uninsured, Charlotte elected to not follow up this procedure with radiation treatments. In the days and weeks following her diagnosis, Charlotte felt like she had no answers, no insurance, and no hope. AND, even no plans to be alive today. She found solace in knowing that her 4 children were there to lift her up in so many ways. In that, she found her strength.

Over the next 4 years, Charlotte felt something was just not right within her. She had a total of 9 emergency room visits, emergency surgeries, and test after test. Something wasn’t adding up with her declining health. At a quarterly visit with her Oncologist, she showed her doctor a small lump beneath the skin of her right breast. At that time, her doctor ordered a mammogram, which came back “normal.” However, she was becoming so fatigued that she was no longer able to function in her day-to-day duties.

This past fall, her primary care doctor commented that she probably had “cancer on the brain” because nothing was actually there. However, at Charlotte’s request he ordered some testing and blood work, which came back abnormal and finally prompted him to order a biopsy of her breast. On February 27, 2017 Charlotte received that devastating news yet again. She was diagnosed with Stage II breast cancer.

Although her journey with breast cancer is still very new, fresh, and unknown; Charlotte has learned one very important lesson… Speak up! When something doesn’t feel right, ask questions. Charlotte’s belief in her own strength and the belief that the fight is worth it, mirrors all that The Teal Recovery Project strives to accomplish.